It’s official – Australia is seeking the best and brightest talent from around the world, and will bend the visa rules when they find it!

In November the Government officially launched 5,000 new fast-track visas for seriously talented people to participate in high-tech initiatives throughout Australia.

The new Global Talent Independent Program (GTIP) will see Government officials actively seeking out and recruiting talent from around the world, starting with people with advanced degrees and/or experience obtained in leading global universities.

Sectors being targeted include financial technology, agricultural technology, space and advanced manufacturing, medical technology, energy and mining technology, cyber security, and quantum computing.  Most importantly, these visas will be part of the permanent skilled migration program, under which 70,000 permanent visas are issued annually.  The Minister for Immigration, Citizenship and Multicultural Affairs, the Hon David Coleman MP, said that under the plan, the 5,000 visas will be spread over five or six key high growth industries.  The idea behind this initiative is that these high growth industries have the potential to create large numbers of local jobs for Australians.

Typically, permanent visas take months to be granted, however the Government promises to ensure the new visas are processed in a matter of weeks.  Each applicant will be allocated a dedicated contact in the immigration department to handle their case – as opposed to being forced to use the call centre.

The GTIP initiative follows the announcement of the extension of the employer sponsored, highly skilled visa scheme, known as the Global-talent Employer Sponsored (GTES) program.  Qualifying established businesses and start-ups will get streamlined access to the skilled and talented workers they urgently need.  Rolled out as a twelve-month Pilot Program in South Australia in 2018, the Global Talent Employer Scheme (GTES) Pilot was initially criticised for not yielding results.  In spite of this, it has now been adopted for permanent and  widespread implementation across the country.

At Emergico we have so far assisted more than 6 people in the new Global Talent Independent Visa, of which the first two were granted permanent residency in less than a week.

Why is the Global Talent Program required?

Put simply, Australia’s visa system is heavily regulated and sometimes fails to accommodate high-value individuals, who may miss out on an opportunity for a visa due to something like being over 45 years of age – to the detriment of Australia.  Further, many visas take an incredibly long time to process, and this is not helpful for fast-moving technology industries with specific skill needs (or indeed for any business for that matter.)

Australia has signalled its intention to focus heavily on Science, Technology, Engineering and Mathematics (STEM); considering that the sector is of critical importance to our current and future productivity.  There are several initiatives and funding arrangements in place to assist in STEM education and digital literacy.

The Global Talent initiative suggests the Government is adopting a more business friendly approach to the skilled visa program within the STEM sector.

Features and Benefits of the Global Talent Program

Below is a Table which describes the two Global Talent Pathways, eligibility requirements, and features. 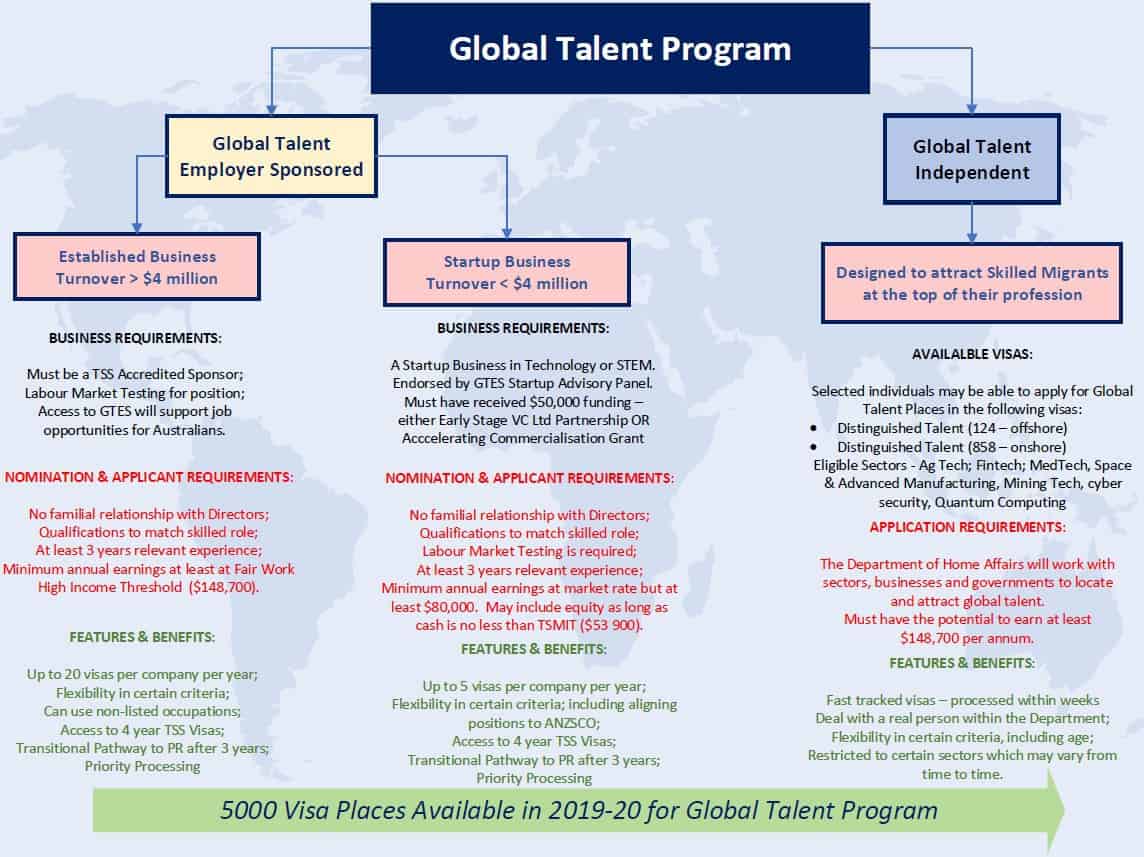 During the Pilot of the GTES, 18 businesses were accepted as Approved GTES Employers – most are established businesses with a turnover in excess of $4 million; the remainder are start-ups which have received an Early Stage Venture Capital Limited Partnership (ESVCLP) or an Accelerating Commercialisation Grant.

Given the broader acceptance of the program, we expect to see many more approved employers.

Think the Global Talent Program could be for you?

Whether you’re an employer with a need for highly skilled technology workers; or you have special skills yourself, we are in a great position to guide you and advise you on this special visa pathway.  Contact us today for a preliminary discussion.