Adjust Your Expectations – the 189 Visa

Has the 189 Visa entered into retirement mode early?  The lead indicator figures would certainly suggest that.

In the April and May Skill Select Invitation Rounds, only 100 invitations were issued for 189 visas.  This is unprecedented; we have never before seen 189 invitation numbers this low. 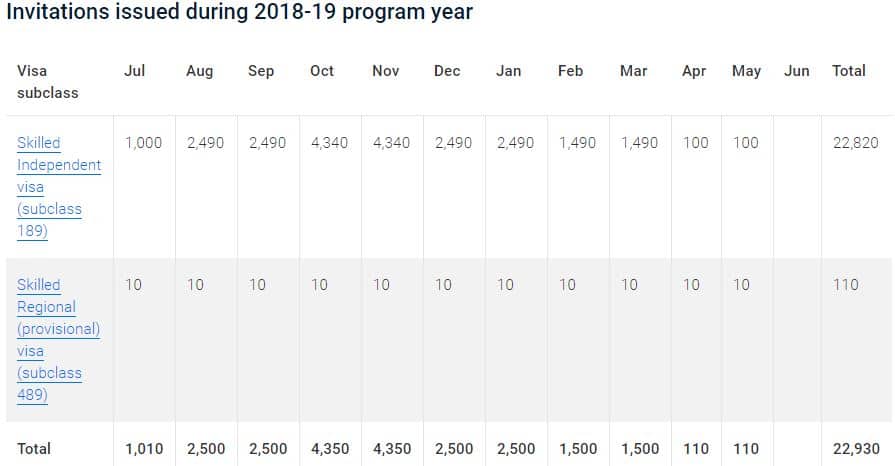 We mentioned in a recent blog post that, in 2019-20, the numbers of 189 visa to be issued will drop dramatically from around 40,000 in 2018; to 18,000.  This represents a decrease of around 55% and coincides with the introduction of new Regional Visas later in 2019, which are expected to become the primary opportunity for people seeking skilled migration in the next few years.

Given that the Liberal/National Coalition Government has now returned to power following this month’s general election, and they now have a majority government, it’s reasonable to assume this trend is likely to continue without opposition – at least until some evidence based data emerges to show that there is a need for policy re-alignment, which could be months or years away.

Why are the numbers so low?

In response to a question about the recent low invitation numbers, the Department of Home Affairs has stated that they have sufficient EOI’s in the system to meet demand for the remainder of the financial year.  The last time we saw an invitation on less than 80 points was in March.

To get 80 points, you’d essentially need top marks in pretty much everything.  If, for example, an overseas applicant was aged between 25  and 33, had a PhD level qualification, had 8 years of overseas work experience in the last 10 years, and scored Superior English; they would score 85 points under the current points test.  Candidates such as this are rare (but very welcome in Australia!)

Of course, it’s possible to obtain points in other ways, such as partner points; NAATI, study in Australia, or a professional year.  However, by and large, it’s pretty hard to get 80 points.  We’d expect successful 189 candidates in the future to come mainly from people in professional occupations with advanced levels of study.

If you want to come to Australia – don’t become fixated on a 189 Visa.

We’ve said it before and we’ll say it again.  The future is regional.  Change your thinking and be open to the opportunities that this will provide – now, and into the future.  Before everyone else cottons on!

Contact us if you want to embrace the opportunities this will bring!